VDV Recommendation 169 deals with the installation and cabling of electrical equipment in urban rail rolling stock. In Germany the term “urban rail rolling stock” usually covers tramcars, light rail vehicles and metro vehicles operated in accordance with the German Federal Regulations on the Construction and Operation of Tramways (BOStrab). However, it can also include railway vehicles and trolleybuses. Of course, the term “vehicle” is also used in the sense of “urban rail rolling stock” in this Recommendation. The recommendations and information given in this VDV Recommendation are based on many years of experience of the public transport companies. As the electrical equipment has decisive influence on the reliability and availability of the rolling stock, it is of utmost importance that it is carefully installed and cabled. VDV Recommendation 169 is intended for the rolling stock engineering staff of the public transport companies and the electrical equipment designers of the rail industry and is to be applied to both new vehicles to be procured and existing vehicles to be electrically retrofitted or modernised. As this subject is extremely broad, this VDV Recommendation mainly includes general information. Reference is only made to the contents of cited standards if experience has shown that it is essential or very advantageous to consider them. VDV Recommendation 169 had to be updated because the European standards EN 50343 “Railway applications - Rolling stock - Rules for installation of cabling” and EN 50153 “Railway applications - Rolling stock - Protective provisions relating to electrical hazards”, on which it is based, were revised recently. Moreover, meaningful suggestions of VDV member companies have been implemented. 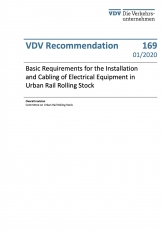